Theses are rare, benign, but highly vascular tumours that can affect the ear, skull base and neck.

In the head and neck area, most commonly they present with pulsatile tinnitus (a whooshing sound in the ear in time with the pulse), and or a hearing loss. Occasionally a mass in the neck, or abnormalities of voice and swallowing can be the inital symptoms. 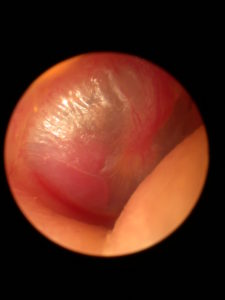 A microscopic picture of a right ear. A reddish mass can be seen behind the tympanic membrane (ear drum), in the postero-inferior quadrant. This tumour can be contained only within the middle ear, or can represent the ‘tip of the iceberg’, having extended superiorly from the jugular foramen.

The management is highly complicated and is essential that this be carried out by a multidisciplinary unit, such as that at St Vincent’s Hospital, which has a vast experience in managing these tumours. Treatment can range from surgical removal with complete return to normal function in those tumours confined to the ear, to major surgery that can lead to a number of neural deficits. It is for this reason that often immediate treatment is not always indicated as careful observation can maintain a better quality of life, especially in the short to medium term.

There are also genetic issues that play an important role in the management of the patient and their family.

Paragangliomas are tumors that arise from the paraganglionic system, aggregations of cells found throughout the body associated with vascular and neuronal adventitia. They originate from the neural crest and are related to the autonomic nervous system, with those of the head and neck associated with the parasympathetic division, as opposed to the sympathetic division for the remainder.

There is, and has been a vast variance in the literature in the terminology surrounding  these tumors.

The term chromaffin tumor relates to the characteristic histochemical reaction of cells that secrete catecholomines. Commonly used terminology describes a pheochromocytoma as a chromaffin tumor arising in the adrenal medulla, and paraganglioma or extra-adrenal pheochromocytomas for those arising in the sympathetic ganglia in the abdomen and chest.

Non-chromaffin tumors [also previously called chemodectomas], correspond to paraganglioma arising from the parasympathetic division, i.e. those of the head and neck.

The term glomus tumor has long been used to describe paraganglioma of the head and neck.  True glomus tumors or glomangiomas, however, are histologically separate cutaneous tumors, arising from neuromyoarterial cells around arteriovenous anastomoses.

Therefore the term glomus should be replaced with that of paraganglioma annotating its location, as outlined in the WHO classification.

Paragangliomas can arise as both sporadic and familial entities, a fact first documented in 1933 by Chase, in a description of bilateral carotid body tumors existing in sisters.

It is now known that 25-35% of paragangliomas are associated with recognised genetic defects, autosomal dominant germline mutations of 7 genes have been described. Classically association with MEN2, VHL and NF1 have been recognised, but certainly in the head and neck it is the  familial paraganglioma syndromes (PGL1, PGL2, PGL3, and PGL4) which are associated with germline mutations of SDHD, SDHAF2, SDHC, and SDHB, respectively. The SDH is a an enzyme that is involved in intracellular metabolism.
PGL1 occurs with mutations of SDHD that maps to 11q23 and disease is  inherited via maternal imprinting. It manifests more commonly with head and neck paragangliomas, has a higher penetrance, and has a greater incidence of multifocality compared with tumors bearing germline SDHB mutations. PGL2 is rare and generally manifests as head and neck paraganglioma. The gene responsible for PGL2, initially termed SDH5 but now known as SDHAF2, has only recently been described and maps to 11q13.1.  PGL3 results from mutations of SDHC (1q21-23) and is also rare. To date, only a few kindreds have been described. Affected individuals develop tumors that are unifocal, benign, and usually located at the carotid body. PGL4 occurs with mutations of SDHB 1p36 and more commonly manifests as intraabdominal sympathetic paragangliomas. It has a much higher risk of malignant behavior that may be greater than 50%.
Genetic testing should be considered in all patients, but certainly those with multiple tumours, those with onset at a young age, especially if male. This is expensive, however, so it has been suggested that SDHB IHC (immuno-cytohistochemistry) can be performed as a cost-effective triage to formal genetic testing for SDHB, SDHC, or SDHD. If positive then the likelihood of a germline defect is extremely low. [Immunohistochemistry for SDHB triages genetic testing of SDHB, SDHC, and SDHD in paraganglioma-pheochromocytoma syndromes. Gill, A et al. Human Pathology. (2010) 41, 805–814.]

Multiple tumors are not uncommon, found in 10-20% of sporadic cases, and in up to 80% of familial cases.

All subtypes of head and neck paraganglioma show a peak age of presentation in the fourth and fifth decades, with rare incidences of pediatric cases.  While the sex ratio is equal in carotid paragangliomas, females are affected 4-6 times more than males in tympanojugular paraganglioma. Males however are more commonly affected in the familial type. Those with a familial etiology, however present at a significantly younger age.

High altitude appears to increase the incidence of carotid body tumors but not other head and neck paraganglioma, with a significant female preponderance. 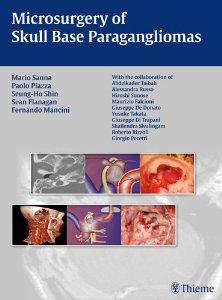 Microsurgery of Skull Base Paragangliomas has recently been published. It is a book co-authored with Mario Sanna, Paolo Piazza, Seung-Ho Shin, Sean Flanagan and Fernando Mancini. It is  a definitive resource in the management of these complex tumours.