This rare condition has only recently been described by Lloyd Minor in 1998.

It is caused by a dehiscence, or a lack of bony covering of the superior semicircular canal. This creates a dissipation of sound energy through this dehiscence, the so called third window. It is also creates vestibular symptoms in response to loud noise and pressure changes.

The cause of the dehiscence is not usually found, most likely due to slow erosion of the bone. Occasionally trauma, infection or a tumour can be responsible.

Varying degrees of sound and pressure induced vertigo, or disequilibrium are usually seen. This can be associated with conductive hearing loss, autophony and conductive hyperacusis. Patients often describe the sensation of hearing their own footsteps, or even the sound of eye movements.

This condition can mimic or be confused with a long list of otologic problems. The following must be differentiated: Otosclerosis, Menieres disease, Perilymph fistula, Migrainous vertigo, BPPV, Patulous Eustachian tube,  among others.

The diagnosis is initially suggested by history but due the often atypical presentation a fine cut CT scan of the petrous temporal bones must be performed, most helpfully conducted in the plane of the superior semicircular canal. There is however a 0.7% rate of radiologic dehiscence on population based studies, so both audiology and electrophysiologic studies must also be performed. A hearing test will often detect an apparent conductive hearing loss, and a VEMP (vestibular evoked myogenic potentials) will show a large amplitude on testing the affected side. 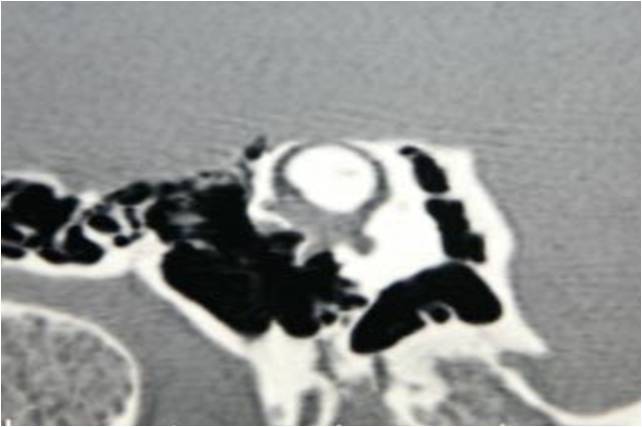 This is a CT scan taken perpendicular to the plane of the superior semicircular canal. Missing bone between the brain and the canal is seen.

The degree of symptomatology will dictate whether interventional treatment is required. Often diagnosis and exclusion of more sinister causes can be reassuring and the symptoms can be tolerate.

Definitive therapy involves resurfacing of the dehiscent bone. This is performed by creating a mini-craniotomy, and lifting the dura (lining of the brain) in order to locate the dehiscent membrane. This area is then plugged and or reinforced to reseal this area. The risks of the procedure is small, although there is approximately 5-10% chance of worsening the hearing.

As this is a complicated condition with advanced surgical techniques required for treatment extensive testing and discussion is required.

A recent review in Otology Neurotology provides a good overview of treatments, and outlines a trend toward transmastoid approaches if anatomically feasible.