A condition that is characterised by autophony (the hearing of one’s own voice), intermittent pressure, popping and clicking in the ear. Often one can sense the movement of the ear drum with nasal respiration. The symptoms are often triggered during exercise, prolonged standing, singing and stress. They are invariably improved when the head is placed in a dependent condition, or when you have a cold. 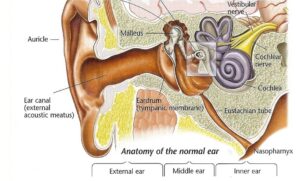 External, middle and inner ear, with eustachian tube connecting the middle ear to the nasopharynx

It is caused by the Eustachian tube remaining open in the resting state, transmitting a relatively increased pressure to the middle ear.

The Eustachian tube connects the middle to the nasopharynx (the back of the nose), and acts as a pressure release valve of the ear. In its resting state it is closed, and opens on swallowing or on performance of a Valsalva manoeuvre. In a patulous eustachian tube this tube is too open, and thus transmits sound, pressure and respiration into the middle ear.

About one third of patients develop this condition following significant weight loss, and paradoxically is more common in pregnancy. In most cases it is self limiting and or mild. One of the most frustrating thing for many patients is that they have seen many doctors who have looked into the ears and have been told that there is nothing wrong, or have been treated with nasal sprays designed to open up the eustachian tube.

The definitive diagnosis is made when we can observe movement of the ear drum (tympanic membrane) whilst the patient is breathing in and out through the nose.

Standard treatments aim to create nasal mucosal congestion with the goal of keeping the eustachian tube more closed. Staying well hydrated, minimising caffeine and being aware of triggers in important. Symptomatic relief can be gained by lying down or putting ones head between the knees. More direct treatments include hypertonic saline nasal spray or rinse, irritant drops like Glycerol in glucose or oestrogen are the commonest of these but are often poorly tolerated. Patulend drops are better tolerated but need to be ordered from the US. 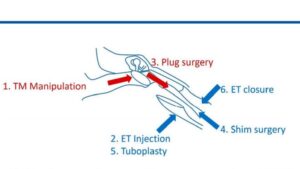