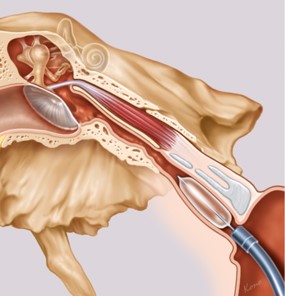 Most of the time dysfunction is related to the tube not opening and closing properly. The commonest symptom is a transient blocked feeling that can occur after a cold. When the tube completely blocks the middle ear fills with fluid leading to significant hearing loss. This fluid can also become infected leading to acute otitis media and more rarely mastoiditis.

Occasionally the eustachian tube can remain too open, a condition called patulous eustachian tube dysfunction. The symptoms are also a blocked type sensation, patients hear their own voice much louder (conductive hyperacusis) as well as feeling the ear drum move when breathing in and out through the nose. (This will be discussed in another article)

The treatment for obstructive eustachian tube dysfunction is mainly conservative. This means that it will usually resolve with time, the use of nasal saline and steroid sprays, and ear popping (Valsalva) exercises. When this is unsuccessful options include ventilation tube insertion (grommets), especially if there is fluid trapped in the middle ear, or dilatation of the eustachian tube.

Balloon dilatation of Eustachian tube, introduced in 2010, is a transnasal procedure where a endoscope is used to guide insertion of a balloon catheter into the opening of the eustachian tube. The balloon is then inflated for 2 minutes and then removed. The goal is to improve ventilation of the middle and relieve blockage. There has been a number of recent publications that support its use, albeit with strict criteria.1,2

The obvious limitation of balloon dilatation is that it is only targeting mucosal oedema within the cartilaginous portion of the eustachian tube.

Abnormal tympanogram; type B or C