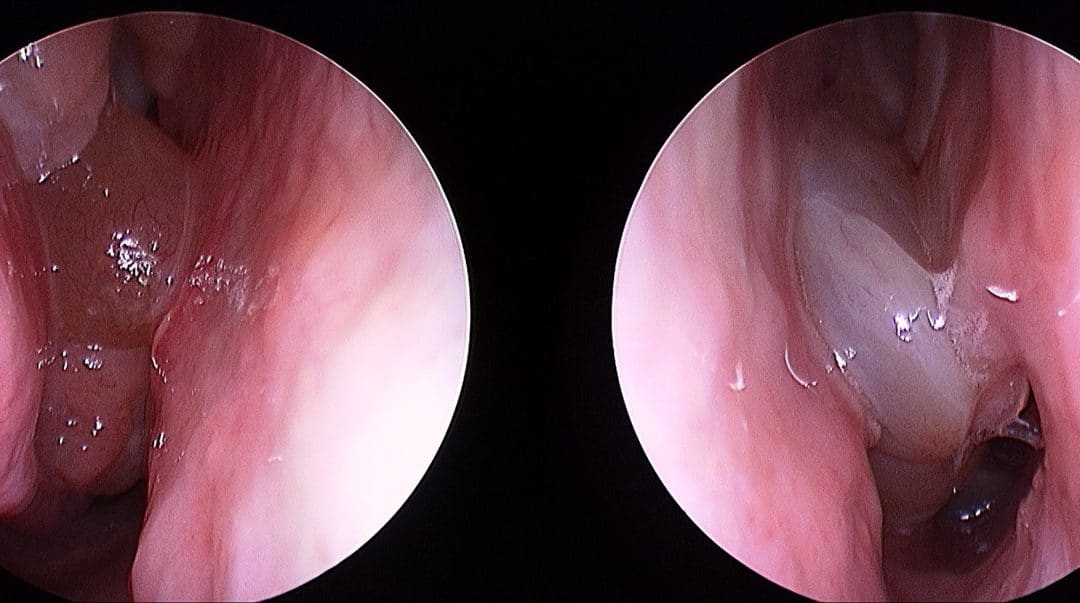 Typical appearance of nasal polyposis on endoscopy. A sign of an inflammatory sinus disease process.

So much is still poorly understood about the disease process that drives the formation of nasal polyps. For a long time now, the medical community acknowledges that the origins of adult-onset nasal polyps is primarily an inflammatory disorder (as is adult-onset asthma). There is little role for the concepts of ‘ventilation’, ‘blocked’ sinuses or a simple infection in the origins of this condition. Nasal polyps DO NOT form simply because there is an obstruction of the sinuses.

An abnormal eosinophilic inflammatory response is the predominant process that underlies chronic sinusitis with nasal polyposis. This process is very similar to adult asthma and severe forms of dermatitis, It is NOT believed to the be a result of the micro-flora (micro-orgnanisms that live on our body surface and in the mucus)  but a result of an abnormal host response. There is still debate in the otolaryngology literature as more research continues on the microbiome  of mucus but for more advanced respiratory researchers, such postulations in the lower airway have been put to rest by science.

Nasal polyps (NP) are noncancerous growths within the nose or sinuses. Symptoms include trouble breathing through the nose, loss of smell, decreased taste

High grade tissue eosinophilia seen in the mucosa in patients with nasal polyposis.

There has been fundamental shift in the how the medical community has addressed nasal polyp related sinus disease. Not so long ago, patients were offered a nasal polypectomy (simple polyp removal). This offered very little change to the underlying pathologic process or disease course. Ultimately, many patients had repeated removal of their nasal polyps without the underlying disease being controlled or modified. Over the past 10 years, there has been a concerted effort to change this in our profession. Much of what we offer patients today is about effectively delivering anti-inflammatory therapies to the sinus cavities to control the underlying disease process. Many patients feel a significant benefit from corticosteroid therapies when given orally (such as prednisone), however, the effect disappears when they cease. Patients are often asked to use simple nasal sprays – that are loaded with the identical type of corticosteroid or even a more potent form –  to find that the simple sprays offer little benefit. This phenomenon is simply a result of ‘where’ the medication is reaching. Simple nasal sprays DO NOT deliver the medication into the sinus cavity. 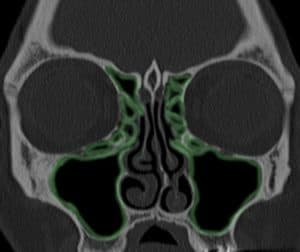 The location of the disease process in nasal polyps: not an area reached by simple nasal sprays

If nasal polyp disease is primarily an inflammatory disease occurring in a difficult location (to reach or deliver medication) in the human body then how can we manage it better? This was the focus for a PhD project by Prof Kornkiat Snidvongs who kindly worked with our group in Sydney for 3 years. His story is summarized in the Macquarie University video produced when he was made a finalist for the science awards (sadly he did not win 🙁 ).

Since then, the main study has been published in IFAR as one of the few randomized and placebo-controlled trials performed in our profession on chronic sinus disease and nasal polyps. Prof Snidvongs has also continued to work on the markers and nature of chronic inflammatory sinus disease. A recent study from Prof Snidvongs highlights the degree of tissue eosinophilia which defines the inflammatory sinus disease patient and in particular to the threshold that makes a patient ‘at risk’ for recurring disease after initial treatment (a threshold of about 50 eosinophils/high powered field (HPF) on tissue analysis). 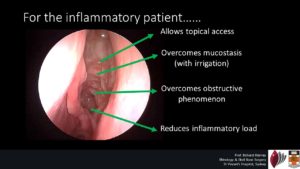 Of course, not all polyps are eosinophilic in nature and not all airway disease will be controlled with topical therapies (see our post on controlling severe airway disease).  We have seen some patients with dramatic airway disease return non-eosinophilic tissue changes. These patients are uncommon but when they occur, we move away from corticosteroids  (and other therapies that work well in eosinophilia) and target the non-eosinophilic process. The most significant of these therapies is low dose, long term macrolides. Macrolide therapies have an established role in treating some airway diseases and have revolutionized the prognosis from some conditions such as diffuse pan bronchiolitis.  A recent fellow from Sydney, Dr Gretchen Oakley, published a nice study that highlights the features of the “macrolide responder” in sinusitis – this is patient WITHOUT tissue or serum eosinophilia and has not yet developed remodelling changes.

A poor response to corticosteroid therapy.

The above dramatic response from macrolide therapyabove has only been observed in in non-eosinophilic nasal polypsf -this is the only subgroup in which this treatment is applied. For more information on the appropriate use of macrolides please read Dr Oakley’s review publication.