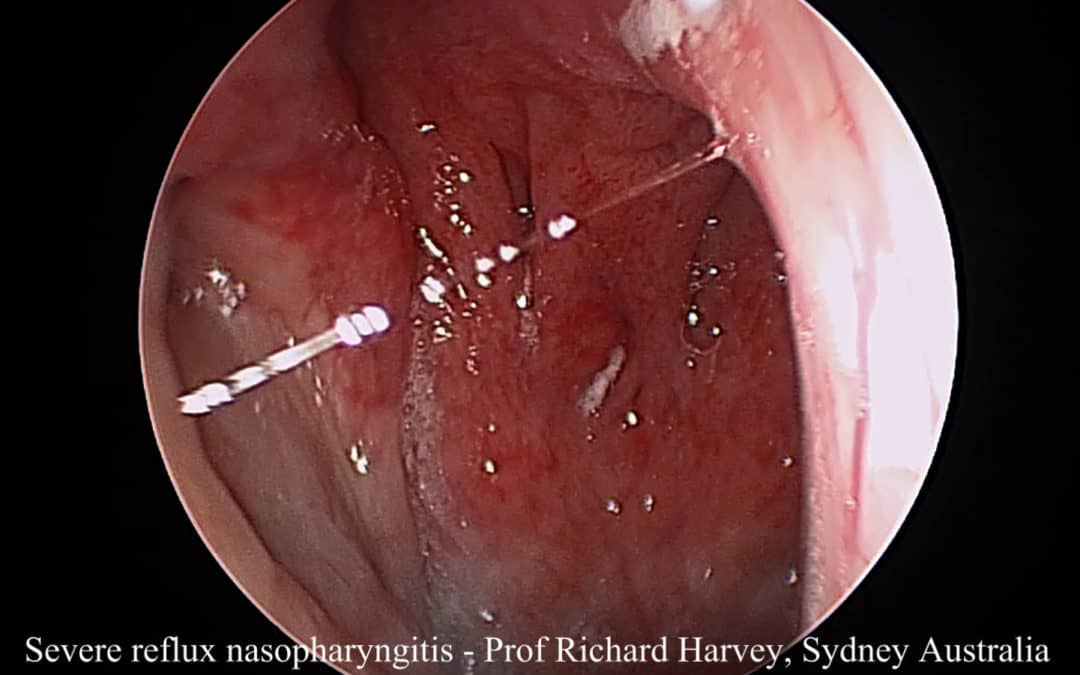 We have all experienced the post nasal drip or mucus sensation. It is not uncommon for all of us to have such sensations at the tail end of a viral upper respiratory track infection and when we are dehydrated.

We see a lot of patients that have these symptoms, and many are convinced they have sinus disease. Often to their surprise, radiology assessment of the sinuses is normal. Sadly for a few, they have minor changes on the sinus radiology/scan and pursue a path of ineffective interventions and even unsuccessful surgery – having everything from turbinate surgery to mini-FESS to more comprehensive sinus surgery.

In making the diagnosis within patients with post nasa drip, there are very easy diagnoses to make in confirming the cause of post-nasal drip. Some have an obvious allergy – they are atopic with rhinitis, conjunctival, skin and lung symptoms and just happen to have some mucus sensation in their throat. These patients are easy to isolate, their mucus sensation disappears with corticosteroid therapy and allergy treatments. Importantly, these patients have other allergic symptoms in proportion to their PND.. However,  these patients don’t get their PND symptoms from excessive or thicker mucus but simply an increased sensation from their allergically irritated mucosa and was a focus a study we published with Prof Rimmer.

The next group of patients are those  in which there are equally significant  ‘anterior’ nasal symptoms: anterior mucus production, nasal blockage (not a sense of congestion or heaviness), smell dysfunction and they proportional (ie not a sense of ‘drowning in post nasal mucus” with little anterior). These patients on examination with have mucus on endoscopy: 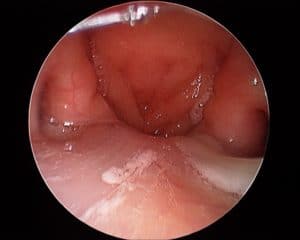 The main causes of post nasal drip or mucus

Several years ago, a keen young researcher in our group performed a systematic review to assess the relationship of gastric reflux and sino-nasal disease. We are all aware of an established link in childhood but had little idea of the evidence base that existed in adults. We were surprised that there were more than 60+ original research studies linking reflux and sino-nasal disease. These studies and 22 case-control studies  contributed to a data synthesis were published in Rhinology. 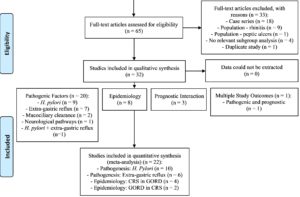 When gastric contents leave the stomach and then exit the esophagous (ie extra-esophageal reflux or laryngopharyngeal reflux) they cause a chemical irrigation of the larynx, pharynx and nasopharynx. We know this occurs and evidence exists to support it.

We see this clinically as odematous changes are the larynx and contributes to chronic throat clearing and unexplained cough:

In the nasopharynx, we see this chemical irritation as redness (erythema) and broken blood vessels (hemoicrrhagic changes). We have posted this previously but a recent patient came to see me with an extraordinary story that highlights the extreme of this condition. A young doctor had a mild atopic or allergic history but had been self managing his own condition. He was young and bright but still in his early part of his career (yes – the pitfalls of self treating). He had developed reflux and this had become severe. He start a proton pump inhibitor (nexium) and this stopped his heartburn symptoms. Its important to note that this doesn’t stop the reflux but just makes it less acidic. If he stopped his medication for a day or two he had severe heartburn pain return. However, he continued to chase upper airway symptoms: a cough that didn’t seam to respond to his usual asthma therapy and strong post nasal drip that didn’t respond to his self initiated sino-nasal treatments. Not surprisingly, his radiology of his sinuses was normal and his nasopharynx had the worst hemorrhagic and erythematous changes (on a good day for him) that I have seen.

If such a spectrum can exist, surely to many patients in their 40s-50s that develop post nasal mucus or drip in the absence of significant other ‘mucosal based’ symptoms then extra-esophageal reflux is a likely contributing factor.

The other group that we see with non-reflux associated post nasal drip is a suspected viral reactivation. These patients are often younger, sometime the parents of young children or athletes. They don’t have the nasopharyngeal erythema associated with reflux but often have a reactive change in the numerous lymphoid patches in the pharynx. Viral PCR swabs have been very useful in making this diagnosis when active: 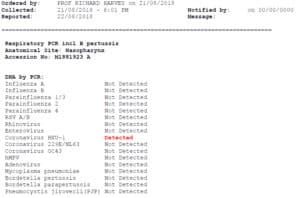 This is a simple outline of the successful approach that we take in trying to help our patients through these troubling symptoms. Sometime the hardest task is to shift the mindset of the patient that is convinced they have sinus disease despite all the evidence against it.