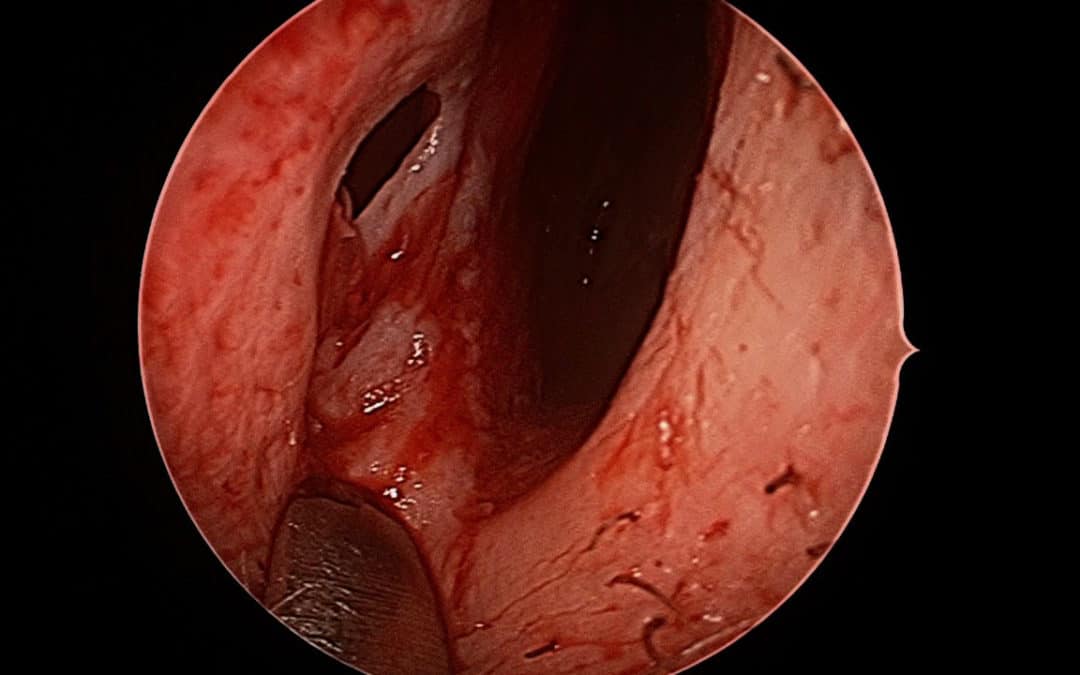 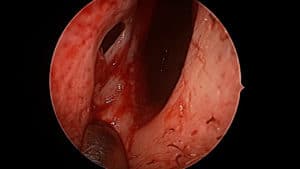 Typical perforation of the septum as viewed from the left nostril. Crusting, bleeding and whistling are common symptoms.

While a septal perforation was once more common after sino-nasal surgery, I dont see this as a common cause in the 21st century. Trauma, drug use and chronic nose picking are more common causes, with some perforations really having no defined contributing factor (idiopathic) and problem represent a local chondral (cartilage) infection many months or years prior.

Management of a septal perforation

Traditionally, many patients were offered ointments, sprays, irrigations and other topical preparations in an attempt to moisturize and reduce the subsequent mucositis/chondritis. This is very dismal prospect for a younger patient (<65yrs old), essentially a sentence to lifelong nasal care. Some doctors have offered trimming of the exposed cartilage or ‘widening/enlargement’ of the perforation to make it stable or less symptomatic. The use of foreign materials to ‘cover’ the perforation have also been used (septal buttons). Unfortunately, foreign material, no matter how inert, still causes cachosmia, crusting and has its own problems.

Surgical closure has been traditionally described in many different techniques – none of which have become a standard – which  can often an be interpreted that they all have limitations. However, this has changed with our use of true pedicled mucosal flaps.

The use of vascularize mucosal flaps has revolutionized our ability to perform complex skull base surgery. These mucosal flaps are very similar to local skin flaps when excising skin lesions.  One option for mucosal flaps is the use if the anterior ethmoidal artery flap (as originally described by Castelnuovo). Modifications of this technique have been an major advance in offering patients a robust and reliable reconstructive option. We have several research efforts around this approach with great success. This approach ‘borrows’ the mucosal based on the anterior ethmoid artery from one side of the septum and moves it forward to the cover even the most anterior septal perforations. Thus it is excellent for very anterior perforations and those perforations as large as 4cm or <50% of the entire septum. 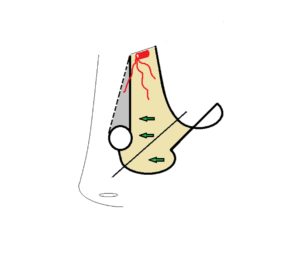 A schematic of the AEA flap used in perforation repair

Importantly, we utilise a collagen matrix in addition to what was initially described. This allows a scaffold for healing. On the contralateral side, blood vessel ingrowth could be seen within the first 20days, before we started to free graft this area as well. 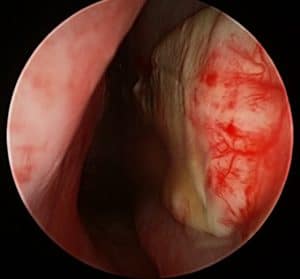 The vascular in growth through the collagen at only 3 weeks.

Now we cover this contra-lateral side with a thin mucosal free graft and robust healing is seen. Silastics are important occlusive dressings in the postoperative period.This technique is incredibly reliable with a 95%+ rate even when we include all etiologies and those patients with prior attempts at repair. No longer is septal perforation a condition that should lead to a life of continuous nasal care. Closure should be considered early for those without ongoing risk factors for septal perforation.