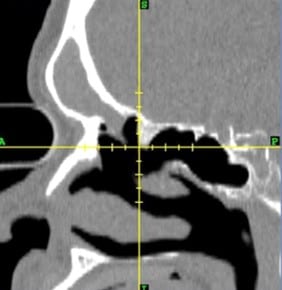 The appropriate interventions for the  frontal sinus is still often debated. A recent scientific publication on frontal sinus disease relative to the extent of prior frontal sinus surgery was published in the European literature. This research supports prior Australian and North American experience with partial frontal sinus surgery. There was a time when partial surgery or instrumentation (such as using sucker or for a washout) was considered the more conservative option over formal dissection of the frontal sinus (mainly due concerns over scarring). However, surgical techniques, instruments, visualization and our understanding of the disease process has evolved.

its debris through the ostia toward the choanae. Infection of the frontal sinus causing sinusitis can give rise to serious complications, as it is in

Honest early researchers, acknowledged that for CRS patients, 97.5% (39/40) of CRS with ‘diffuse hyperplastic disease’ had persistent frontal recess inflammation on endoscopy post ESS (where no draf 2 performed). Many of these patients were not symptomatic initially but experience has shown us that these patients fail over time at a higher rate than those who have not had frontal sinus surgery in the setting of common patchy CRS disease (with presumed inflammatory eitiologies).  The recent publication by Nakayama et al demonstrates that those patients who had more complete frontal recess surgery where less likely to have frontal sinus disease after endoscopic sinus surgery. Our understanding of the disease process has evolved in CRS and we appreciated that much of what is occurring in chronic bilateral disease is an inflammatory disorder with temporarily disordered mucus clearance for most patients. More complete frontal recess surgery allows for better delivery of irrigations, medications and removal of mucus. All of this enhances disease control and has been a focus of more contemporary CRS care.

What is a complete frontal sinus surgery dissection?

This is simply creating a simple cavity (via a Draf2/3 technique) to allow for better delivery of topical medications to resolve inflammation, allows for removal of mucus that isn’t moving (mucostasis) and over comes any pressure problems (that creates headaches or barosinusitis). 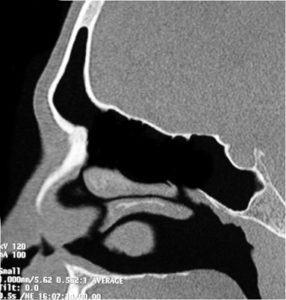 For more on frontal sinus surgery please visit our You Tube Channel and for scientific output our ResearchGate page.