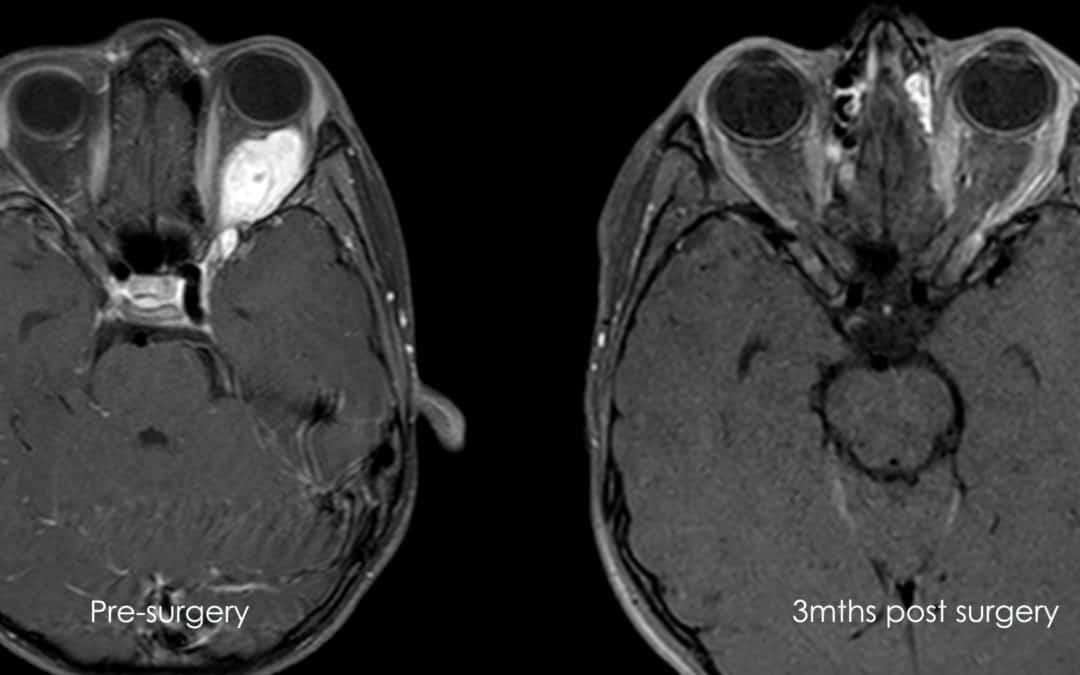 By the middle of last year, Jennifer Geoghegan noticed that her nine-year-old son Stefan had an increasingly protruding eye.

“It was eventually bulging prominently,” said Jennifer. “However, his vision wasn’t being affected, and there was no pain. So we eventually sought some medical advice.”

Axial images of the orbital tumour removed via endoscopic surgery

A biopsy revealed a solitary fibrous tumour – a benign and slow-growing tumour most commonly found in the lungs and very rare anywhere in paediatric populations and, in Stefan’s case, benign. These lesions don’t respond well to chemotherapy or radiotherapy, which meant that surgical resection was Stefan’s next best option.

“The issue for surgical resection was the tumour’s location,” said Dr Krishna Tumuluri, ophthalmologist and oculoplastic surgeon who specialises in orbital disorders, and Stefan’s treating specialist.

“Because it extended back into the eye socket, where the orbit connects to the brain and houses the optic and a host of other nerves, a traditional approach entering via the eye socket would probably have put his vision at risk. It was also huge, giving us very little space in which to manoeuvre.

“So we had to look next at an endoscopic sinus surgery approach to give Stefan the best possible chance of removing the tumour while preserving his site.

Dr Tumuluri talked to long-term colleague Macquarie University’s Professor Richard Harvey, who  specializes in endoscopic sinus surgery and who has trained with the world’s best rhinologists and skull base surgeons. Professor Harvey is  unique in his ability to treat more serious and challenging orbital and sinus pathologies.

In October last year, they planned and performed a combined approach ENT–oculoplastic approach using the most advanced minimally invasive techniques for orbital and skull base tumours.

Through a 100 per cent endoscopic approach, the two surgeons used endonasal and transorbital approaches to reach the tumour and, in an 8-hour surgery, were able to tease out the vast bulk, if not all, of the tumour. 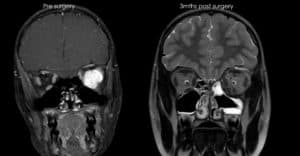 Coronal images of the orbital tumour removed via endoscopic surgery

They used Macquarie University Hospital’s Teatre 12: the Hospital’s dedicated neurosurgery, orbital and skull base surgery space. It is equipped with the latest endoscopes, multi-image guidance systems and an intraoperative CT scanner – all highly advantageous for pinpoint accuracy in the brain area.

“Stefan’s recovery from the surgery was rapid,” said Jennifer. “The bulging, of course, was gone, with bruising and swelling much less than I would have expected. He was so well looked after by the Hospital’s brilliant nursing staff.

“Before the operation, Krishna had been lovely in talking to Stefan about the operation and what might happen afterwards, and we’d prepared him ourselves for possible partial or full loss of vision in his left eye – one of the biggest concerns.

“So there was that tense moment when the eye patch was removed after the procedure when Stefan woke up in Recovery. Was he going to have full vision or not?

“And then an elated: ‘He can see!’ from everyone. It was just phenomenal.”

Stefan returned home and is leading a normal life. He will undergo ongoing monitoring for the next five years.

“This is an excellent outcome for Stefan,” said Dr Tumuluri. “I didn’t imagine it would be such a great outcome. To have removed the tumour to such an extent without loss to vision is really a demonstration of the excellent patient outcomes that Macquarie University Hospital and others are increasingly able to bring to patients through such advanced surgical approaches using highly advanced imaging and other services.”