Minimally invasive techniques for skull base and nasal tumour surgery 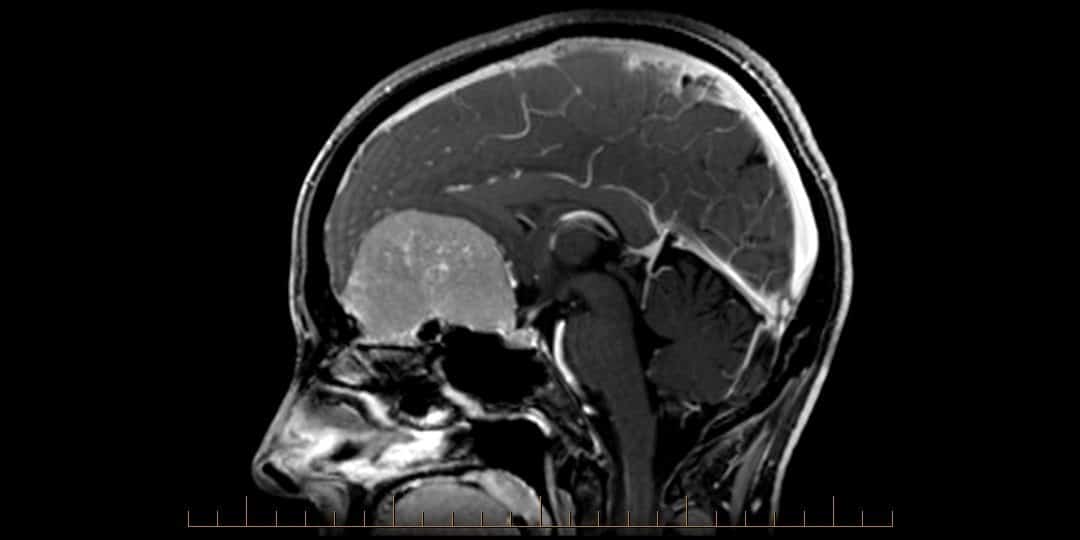 EXTENDING ENDOSCOPIC RESECTION FOR SKULL BASE AND NASAL TUMOUR

An extended resection done 100 per cent endoscopically by Macquarie University Hospital rhinology and neurosurgeons has removed a very large brain tumour with no neural deficit to the patient and similar recovery to nasal tumour surgery.

41-year-old patient Elizabeth noticed that she had lost her sense of smell ­– but experienced no other problems.

“I couldn’t smell perfume or eucalyptus,” recalled Elizabeth. “After mentioning it at a routine annual health check in 2016, my GP referred me to an ENT, who sent me for an MRI suspecting a nasal tumour or sinus disease.

“The MRI showed a very large 6.4 centimetre meningioma sitting on my skull base. It was a real shock.”

Elizabeth then went to Macquarie University Hospital to see Professor Richard Harvey, one of Australia’s most highly trained endoscopic ENT surgeons, having completed three international fellowships with the world’s best endoscopic surgeons in the field. Prof Harvey has extensive experience in skull base, sinus and nasal tumour surgery.

Professor Harvey talked to neurosurgeon Associate Professor Andrew Davidson see if they could collaborate to remove the tumour without doing a craniotomy. The environment at Macquarie University Hospital is highly collaborative and encourages surgeons to work across disciplines to develop new approaches for complex cases. 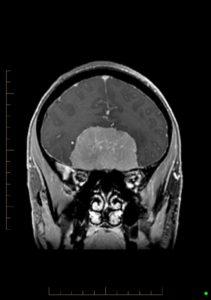 Meningioma of the olfactory fossa

“Elsewhere, it’s quite likely that she would have been treated through open surgery,” said Professor Harvey. “Because this involves retracting the frontal lobes, it’s typical for patients having undergone this to experience long-term cognitive and emotional changes.

“Given the size of Elizabeth’s tumour, there was, of course, an increased chance of problems from open surgery. Working with Professor Davidson, however, we were able to plan access to and removal of the tumour, which was probably the biggest we’ve done endoscopically.”

Endoscopic surgery for nasal tumour and skull base pathology

Endoscopic surgery provides minimal access via a camera through the paranasal sinuses. Surgical entry through the nasal cavity then allows surgeons to access the tumour, along with other nasal tumours from below.

A large part of the procedure involved the approach to the site of the tumour. This requires high anatomical accuracy and was done by Professor Harvey. With Professor Davidson, they performed the tumour removal together, freeing it up from critical brain and neuro-vascular structures. While less than half of the work, this is where the greatest morbidity is most likely to occur.

“I did have concerns whether it was possible,” said Professor Davidson. “Based on the imaging, Richard was sure he could access it and that the tumour would come away well. And, in fact, it collapsed and peeled off easily.”

Post-operative MRI was done on day one to confirm that the resection was complete.

“We have a team at Macquarie University Hospital prepared to do whatever is needed,” said Professor Harvey. “The endoscopic management of difficult tumours has greatly improved the morbidity of surgery and reduced recovery time for these patients. If we can do something this big endoscopically, then there is a whole range of pathologies we can treat.”

Elizabeth spent a total of 13 days in hospital. Her overall recovery was about four to six weeks, compared with the four to six months that it would have been from a craniotomy.

“I really owe it to those two doctors for getting me through not just physically – but mentally,” said Elizabeth. “I was mentally pushed as far as I could go.”

Elizabeth returned to her job at a chiropractic practice and to life with her 16-year old son.

“At 12 months, she has no cognitive loss and a great recovery,” said Professor Davidson. “She is living normally and her brain is in amazing shape one year on; you can hardly tell from the scans that she’s had surgery.” 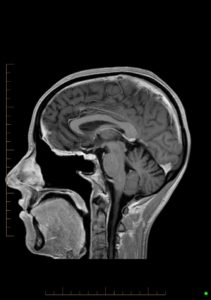 tion equipment, advanced imaging and highly specialised tools – such as the NICO Myriad and Brainpath technologies. A significant hurdle was also cleared with the development of ways to decrease the risk of CSF leak rate, something Professor Harvey contributed to in developing the use of vascularised tissue flaps.

Over the coming years, brain surgeons can look forward to better optical technology, in particular the use of robotics to provide an intuitive light source that responds to the surgeon’s movements.